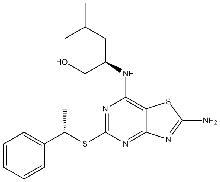 KAND 567 (previously AZD 8797) is a small-molecule antagonist of the Fractalkine receptor CX3CR1, being developed by Kancera, under an agreement with Acturum Life Science and in collaboration with Uppsala University, for the treatment of myocardial infarction, SARS-COV-2 acute respiratory disease, cardiovascular inflammation, and spinal cord injuries. Fractalkine is an immune-modulating factor, which transmits signals via the CX3CR1 receptor, thereby controlling the function of immune cells and cancer cells. Clinical development for SARS-COV-2 acute respiratory disease is underway in Sweden, whereas clinical evaluations for myocardial infraction are ongoing in Sweden and Finland. Preclinical development is underway in Sweden, for cardiovascular inflammation and spinal cord injuries.

No recent reports of development have been identified for cancer pain, breast cancer, pancreatic cancer, and autoimmune disorders. Development for the treatment of multiple myeloma has been discontinued.

In February 2021, Kancera entered into a collaboration with SciLifeLab, which gives Kancera the opportunity to identify new starting points for drug development as needed. Kancera announced that the company is collaborating with SciLifeLab in a research study of patients with COVID-19 who have suffered from long-term symptoms. The purpose of the study is to map how the immune system affects these patients, which is expected to contribute to the development of new treatments. [1]

In September 2017, Kancera entered into a development and manufacturing agreement with Recipharm, for the manufacture of KAND 567. As part of the collaboration, Recipharm will develop the preparation that is required for effective release of KAND 567 from the capsules, as well as manufacturing the pharmaceutical product. The work is intended to be performed at Recipharm’s development facility in Solna [2]

In July 2020, Kancera initiated a phase II trial to evaluate efficacy, safety, tolerability and pharmacokinetics of KAND 567 in patients with SARS-COV-2 acute respiratory disease (KAN0006; EudraCT2020-002322-85). The open label trial intends to enroll 40 patients in Sweden. Patients will be administered with either oral KAND 567 as capsule in combination with the best standard treatment or only the best standard treatment. Earlier the Swedish Medical Products Agency had approved the clinical trial application (CTA) to conduct the phase II trial. Kancera had submitted an application to the Swedish Medicines Agency in May 2020 [3] [4] [5] .

A capsule formulation of KAND 567 has been evaluated in a phase I study in Finland [6] .

In March 2020, Kancera released positive data from the final part of phase Ib trial and evaluated safety, tolerability in 17 healthy volunteers with 6 volunteers in placebo. A total of 92 healthy volunteers have been tested in phase I study [7] . In June 2019, Kancera initiated a phase Ib trial to evaluate the safety, tolerance and exposure of KAND 567 administered intravenously in 27 healthy volunteers in Sweden and Finland. The start of the trial triggered the third and final payment in the form of two million shares to Acturum, in mid-July, in accordance with the ongoing agreement between the two companies [8] [9] [10] . Earlier in May 2019, Medical Products Agency and the Ethics Committee had approved the application for the study. In August 2019, first exploratory part of the trial was completed and company announced positive interim results in healthy participants. The company also announced that a supplemental application would be filed to the Medical Products Agency, for the approval of an adjusted ratio of infusion rate to concentration of KAND 567. The protocol was amended to avoid local irritation at the infusion site, observed in the interim analysis [11] [12] [8] [13] . The company applied for permission by submitting a supplemental dosing strategy to Swedish Medical Products Agency to adjust ratio of infusion rate to concentration of KAND 567. The Swedish Medical Products Agency advised the company to submit supplementary information and a new application permit in order to continue the study. In February 2020, Kancera received approval from the Finnish Medicines Agency Fimea and the Ethics Committee to start the final part of the phase Ib program for KAND 567 [14] . Earlier in November 2019, Kancera reported that it had compiled the requested information and prepared a new application, but in order to maintain the timeline for a phase IIa trial the company had elected to apply for the final part of the study in Finland instead of as previously planned in Sweden. In December 2019, company released analysis of blood samples from healthy participants [15] [16] [8] [11] .

In February 2019, Kancera completed a phase Ia trial that evaluated the safety, tolerability and pharmacokinetic properties of KAND 567 in healthy volunteers. The randomised, double-blind, placebo-controlled trial was initiated in May 2017 and enrolled 82 healthy participants, in the Netherlands. First part of the study is single dose part of the study in which increasing single doses (8-2500 mg) of KAND 567 was given to groups of 62 healthy volunteers with and without food on different occasions. In the second part which is multiple dose part of the study, KAND 567 was given in increasing doses up to 7 days (300 - 800 mg twice a day). The second part of the study was commenced in September 2017 [17] [18] . In February 2018, Kancera announced positive results from this study. Results showed that KAND 567 blocks the fractalkine system by reducing the number of fractalkine receptors on the surface of immune cells. In February 2019, results from the 66 evaluable patients were released by the company [19] [20] [21] .

KAND 567 showed cardiovascular protection properties in preclinical disease models [21] . KAND 567 was evaluated for efficacy and safety in a disease model of myocardial infarction and in a toxicological GLP study, respectively. The efficacy study showed that lower doses than expected provided a significant cardio-protective effect. Preliminary results from the toxicology study provided evidence pointing towards the safety of the calculated effective dose of KAND 567 [23] .

In preclinical studies, KAND 567 counteracted the onset of autoimmune disorders, as well as neuritis and pain in connection with chemotherapy against cancer [2] .

In February 2021, Kancera announced that the conversion of TO4 during 2020 provided Kancera with a total of approximately SEK 38.6 million, which may be utilised for an accelerated development of the company's drug projects aimed at COVID-19 and myocardial infarction, including the drug candidates KAND 567 and KAND 145 [see AdisInsight drug profile800052463] [1] .

In August 2019, Kancera reported that two patent applications related to KAND 567, entered the international phase, at the conclusion of the second quarter of 2019. The patent applications were filed earlier in July 2018, as reported by Kancera [8] [24] . Patents contains use of KAND 567 for the treatment and prevention of hyperinflammation in viral infections [4] .

Results of a phase Ia study showed that efficient absorption of KAND 567 from the intestine to the blood independent of food was observed. KAND 567 stays in the blood long enough in humans to allow dosage one to two times a day. The randomized, double-blind, placebo-controlled trial assessed KAND 567 for the treatment of cancer, cancer pain and auto-immune disorders in 62 healthy participants [20] [18] .

Results from final part of the phase Ib study involving 17 healthy volunteers versus 6 in placebo, showed desired plasma concentration of KAND 567 upon intravenous infusion similar to that found in interim results from a phase Ib study in 27 evaluable volunteers. Desired effect on the immune system reaches the heart within two minutes of the start of the intravenous infusion [7] [8] [10] .

Results from final part of phase Ib study involving 17 healthy volunteers versus 6 healthy volunteers in placebo, of KAND 567 was found to be well tolerated by intravenous administration and it complements the phase Ia study data. Interim results from a phase Ib study in 27 evaluable volunteers, showed that KAND 567 was safe and well-tolerated, when administered as a short-term intravenous infusion, in the initial, exploratory trial phase. The follow-up part of the study however, revealed incidences of local irritation at the infusion site, when the infusion was administered for an extended period [7] [8] [10] .

Results from the single dose part and the multiple dose part of a phase Ia study showed that KAND 567 was safe and well tolerated. In single dose part of the study, no clinically relevant side effects were observed in KAND 567 treated patients in single doses up to 2500 mg. In multiple dose part of the study, KAND 567 is safe and well-tolerated up to 500 mg twice daily for 7 days with five to ten times higher plasma levels achieved than the calculated effective level for therapeutic effect in humans. Gastric side effects in the form of diarrhoea and a clinically relevant increase in markers for hepatic impairment were observed at a dose of 800 mg twice a day (total 1600 mg). However, markers for hepatic impairment returned to normal level after the end of treatment. No other clinically relevant side effects of KAND567 were noted. The randomized, double-blind, placebo-controlled trial assessed KAND 567 for the treatment of cancer, cancer pain and auto-immune disorders in 62 healthy participants [21] [20] [18] .

Results from a phase Ia study showed that decrease in the number of fractalkine receptors on the cell surface of specific immune cells such as NK cells, T cells and monocytes was observed in KAND 567 (300 mg, twice daily) treated patients. Invitro studies in whole blood showed that KAND 567 blocks the fractalkine signal in human immune cells at low concentrations. These findings showed that KAND567 blocks the fractalkine system through two co-operating mechanisms. The randomized, double-blind, placebo-controlled trial assessed KAND 567 for the treatment of cancer, cancer pain and auto-immune disorders in 62 healthy participants [21] [20] [18] .

Preclinical studies in animal models showed that KAND 567 has shown cardiovascular protective anti-inflammatory properties as evident by significant reduction in infarct size (internal report), stabilisation of vascular plaque (internal report) that can cause infarction and reversal of relapse (restenosis) after widening of the coronary artery with so-called vessel stents [20] .

In phase Ib trial, the analysis of blood samples demonstrated lowered levels of an established and clinically relevant immune marker in the participants treated with KAND 567 which showed that blockage of the Fractalkine system led to a significant decrease in activity of two types of immune cells involved in inflammatory diseases and the effect was observed after two hours of infusion [15] [10] .

The analysis of immune cells in the blood from the phase Ia trial involving 66 evaluable patients demonstrated a statistically significant activation of the fractalkine system in the lymphoma patients compared to a group of healthy controls [19] .