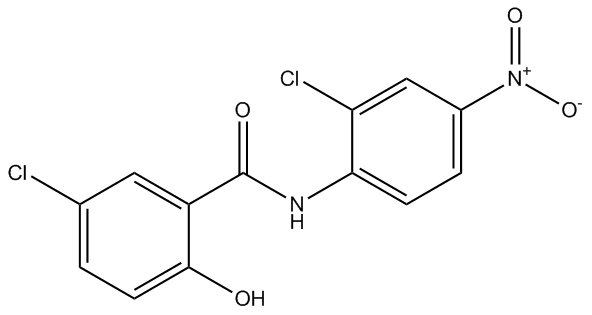 ATx 201, is a niclosamide salt, being developed by UNION Therapeutics (formerly AntibioTx), for the treatment of impetigo, infected eczema and infected atopic dermatitis, caused by Staphylococcus aureus and some species of Streptococcus. The drug is also being developed for the potential treatment of COVID-2019 infections caused due to coronavirus (SARS-Cov-2) Clinical development is underway for atopic dermatitis, eczema, impetigo and an undefined indication in Canada, South Africa, Denmark, Austria and the US. Preclinical development for COVID-19 infections is underway in Denmark.

In October 2018, AntibioTx changed its name to UNION Therapeutics [1] .

In, April 2020, Union Therapeutics collaborated with Institut Pasteur Korea to test an optimised salt form of niclosamide as a treatment of COVID-19 infections. [2]

UNION Therapeutics initiated a phase IIb trial in July 2019, to assess the safety and efficacy of topical niclosamide, in adolescents and adult patients, aged 12 years and older, with mild to moderate atopic dermatitis (EudraCT2019-002771-33; ATX201-207). The randomised, double-blind, dose-ranging trial intends to enrol approximately 210 patients in Denmark, and plans to expand the trial in three countries in the EU. In November 2019, the company reported the first patient first visit in the study [3] [4] .

In March 2018, AntibioTx completed a phase II trial to evaluate the safety and efficacy of niclosamide in patients with atopic dermatitis (ATx201-003; NCT03304470). This three-week, double-blind, randomised, two-arm, vehicle controlled trial was initiated in September 2017 and enrolled 31 patients in Canada [5] . In December 2018, UNION Therapeutics released positive results from the phase II trial. Niclosamide exhibited broad anti-inflammatory effect on various biomarkers affecting core elements of atopic dermatitis pathology [6] .
In March 2018, AntibioTx completed a phase I trial that evaluated the sensitisation potential of niclosamide topical gel (2% and 4%) in healthy volunteers (ATx201-005; NCT03375957). The randomised, single-blind trial was initiated in January 2018 and enrolled 240 participants in the US [7] . In October 2018, UNION Therapeutics released positive results from the phase I trial, which complements data from earlier trials in animals and humans and supports safety and tolerability of niclosamide in healthy and abraded skin [8] .

In November 2017, AntibioTx completed a phase I trial that evaluated the irritation potential of niclosamide topical 2% and 4% gel in healthy volunteers on intact and abraded skin (NCT03301870; ATx201-006). The double-blind, parallel, prospective, randomised trial was initiated in October 2017 and enrolled 36 healthy volunteers in the US [9] .

In March 2018, AntibioTx and Medical University of Vienna completed the phase II portion of a phase I/II trial that was evaluating the safety and efficacy of niclosamide 2% topical gel, in the treatment of skin infections of Staphylococcus aureus and Streptococcus, including eczema and atopic dermatitis (DECOLAD; EudraCT2016-003501-33; NCT03009734). The trial was initiated in December 2016 and phase I portion was completed in April 2017. The primary endpoint of the phase I part was to evaluate the tolerability of three formulations of the therapy in healthy volunteers. The best suited formulation was advanced to the phase II portion, which included patients with barrier impaired skin. The randomised, double blind, placebo-controlled trial enrolled 73 adults, including healthy volunteers in the phase I portion and patients in the phase II portion, in Austria [10] [11] . Earlier, in September 2016, AntibioTx had submitted a clinical trial application (CTA) to the Austrian Agency for Health and Food Safety, to initiate the study [12] [13] [14] . In December 2018, UNION Therapeutics released positive results from the phase II portion of the trial [6] .

In September 2016, AntibioTx reported that a 28-day repeat dosing, initiated in May 2016, of ATx201 in Göttingen pigs was found to be well tolerated with positive PK data and very low systemic exposure, and no genotoxicity was observed [15] [16] [17] . In December 2015, the company initiated a 28-day dermal toxicity study of ATx201 in Hanford Miniature Swine [18] .

As of April 2020, IND enabling studies are underway in Denmark for treatment of COVID-2019 infections (Union Therapeutics pipeline, April 2020) [2] .

In June 2018, AntibioTx completed a phase II trial that evaluated the safety, tolerability, systemic exposure, and activity of topical niclosamide gel (2% and 4%) treatment for 1, 2, or 5 days in outpatients with primary nonbullous or bullous impetigo (ATx201-004; NCT03429595). Evaluation of the incidences of adverse events reports and changes in significant laboratory parameters was the primary endpoint of the trial. The randomised, double blind, placebo control trial was initiated in February 2018, and enrolled 210 patients in South Africa [19] .

Phase I: Data from the phase I trial indicated that niclosamide was safe and well tolerated with no signs of sensitisation and no unexpected adverse events in the active group in comparison with the placebo group. The randomised and placebo-controlled phase I trial enrolled 240 healthy volunteers [8] [7] .